The UK Royal Navy recently organized the UK Submarine Command Course (SMCC) off the coast of Scotland, which saw the participation of three submarines and a number of warships.

The course, which took place in The Minches, is designed to offer leadership and tactical training for prospective submarine commanders.

Royal Navy submarines HMS Talent and HMS Trenchant were joined by Norway’s Ula-class submarine HNOMS Utsira for both offensive and defensive scenarios against “enemy” warships, which, in reality, are NATO surface vessels.

In addition to NATO Standing Maritime Group ships, the exercise was joined by US Navy destroyer USS Donald Cook that integrated with a NATO C2 structure and formed a surface action group (SAG) that searched for Royal Navy submarines while simultaneously defending against simulated torpedo attack.

The Royal Netherlands Navy’s Walrus-class submarine HNLMS Dolfijn had also been en route to the seas off Scotland for exercises but was forced to return home earlier due to an outbreak of COVID-19 on board.

Donald Cook often trains with European allies to increase collective readiness and contribute to the overall security environment. “It was an honor to participate in SMCC’s world-class training for our partner nation’s future submarine commanders,” said Kelley Jones, Commanding Officer of Donald Cook.

The Submarine Command Course is one of the most intense training courses in the world. The majority of the course takes place in the simulators at Devonport Naval Base and at the Naval Base in Faslane. The final weeks of training takes place at sea on board a submarine. According to the Royal Navy, only 70 percent of the officers undertaking Perisher succeed, while those who fail can never serve onboard submarines again. 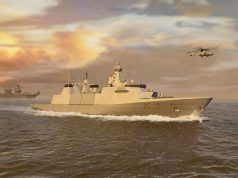