US Naval Special Warfare Operators are in Europe for simultaneous exercises with Croatia, Germany, Hungary, and Romania taking place between May 3 and 14.

Trojan Footprint, which will engage countries located on the Black Sea, is aimed at helping standardize training for NATO partners and allies if they are called to support the region.

“We appreciate the opportunity to train with a diverse group in a strategic location,” said a US Navy SEAL commander present for the exercise. “Our objectives throughout Trojan Footprint are especially useful for the countries located on the Black Sea, and it also helps to standardize training for NATO partners and allies if they are called to support the region.”

“Our primary mission during Black Swan is to train with the Special Operations Craft-Riverine (SOC-R) along the Danube River,” said a US Navy SEAL maritime planner.

The Danube River is Europe’s second longest river, flowing from the Black Forest in Germany, passing through ten countries, and emptying into the Black Sea in Romania. Training and familiarization with the SOC-Rs will help the Hungarian SOF maneuver and defend quickly whether in small towns or major cities like Budapest. 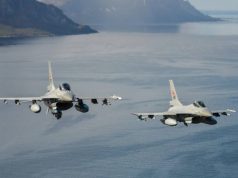 Kongsberg to prepare Norwegian F-16s for sale to Romania, Draken