In another tease of the new fighter that is poised to be unveiled in the coming days, Russian state corporation Rostec shared new photos and video of the light tactical aircraft.

In addition to Rostec confirming Sukhoi as the designer behind the new fighter, the footage released also confirmed widespread reports of the design being a single-engine airframe.

Another YouTube video released by the company provides further insight into the features of the new fighter.

Additionally, Rostec retweeted footage of the Checkmate from a platform of the MAKS-2021 airshow in Zhukovsky, near Moscow, where the fighter will officially be unveiled on Tuesday.

The new footage that emerged on Sunday has resolved the much discussed air inlet solution, showing a single air inlet under the fighter’s forward fuselage. Generally, the design appears to feature a lot of similarities with the larger double-engine Su-57 Felon stealth featuring fighter developed by Sukhoi. It also has a similar paint scheme pattern, with specks of grey in different hues.

As we wrote earlier, the fighter will likely have a takeoff weight of up to 18 tons and a maximum speed of over two Mach. Additionally, thanks to its lighter design, the aircraft is expected to have a high thrust to weight ratio and a large weapon payload.

It has also been indicated that the fighter could be particularly geared towards the export market. This is at least what seems to be Sukhoi’s attention, as a teaser video released ahead of the unveiling shows the aircraft flying over several destinations across the globe, drawing awe from the pilots. 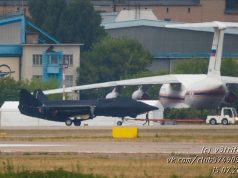