The Russian Navy Oscar II submarine Orel had a close call in the Kattegat Sea off Denmark after losing propulsion during its return from the Russian Navy Day parade in St. Petersburg.

According to the Danish Navy, nuclear-powered cruise missile submarine Orel “had problems with propulsion and lay dead in the water” off Sejerø, drifting towards the island at 1.5 knots.

A Russian Navy Altay-class oiler got the submarine in tow while an Udaloy-class destroyer handled communication during Orel’s breakdown. An offer for assistance was “politely declined,” the Danish Navy said.

Orel was just one of the Russian, and international vessels, escorted by Danish Navy patrol ship HDMS Diana through the Baltic Sea as they were returning from the July 25 naval parade.

The Danish Navy shared several photos of the Russian vessels transiting Danish waters. It was not the first time the service has done so, having previously published aerial shots of Iranian tanker Makran and frigate Sahand off Denmark, en route to Russian Navy Day parade. 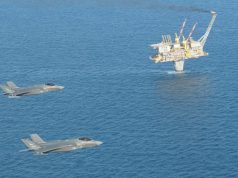