The announcement comes almost exactly a year after the team revealed they were joining forces to develop a 100 kW-class scalable to 250 kW-class high energy laser (HEL).

A GA-EMS release from October 25 did not specify whether the latest contract was related to the last year’s announcement, saying only that the objective of this contract is a demonstration of the design.

“The high power, compact laser weapon subsystem prototype that GA-EMS will deliver under this contract will produce a lethal output greater than anything fielded to date,” said Scott Forney, president of GA-EMS. “This technology represents a leap-ahead capability for air and missile defense that is necessary to support the Army’s modernization efforts and defeat next-generation threats in a multi-domain battlespace.”

Dr. Michael Perry, vice president for lasers and advanced sensors at GA-EMS described the laser as “a packaged version of the 7th generation of our distributed gain design already demonstrated.” He added that recent architectural improvements enabled the company’s single-beam DG lasers to achieve comparable beam quality to fiber lasers without the need for beam combination.

While the two sides never said whether the work was related to an official army acquisition program, the specifics are similar to the service’s indirect fires protection capability – high energy laser (IFPC-HEL) endeavor, for which it has already selected Dynetics to develop a demonstrator by fiscal year 2022.

Dynetics’ work on the IFPC-HEL prototype will inform the US Army’s effort to field prototype units with residual combat capability by 2024. 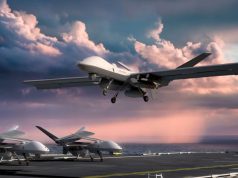