The US Coast Guard has accepted delivery of its 11th HC-144B Ocean Sentry medium range surveillance aircraft outfitted with both the Ocean Sentry Refresh (OSR) modifications and the Minotaur mission system.

Modifications to CGNR 2311 were completed at the Aviation Logistics Center in Elizabeth City, North Carolina. The aircraft will be based at Air Station Miami.

The OSR project upgrades the aircraft with a new flight management system, which manages communication control, navigation and equipment monitoring. After the OSR upgrade is completed, each aircraft is redesignated as an HC-144B.

The medium range surveillance fleet includes 18 HC-144 Ocean Sentries. The aircraft are capable of carrying out a wide range of Coast Guard surveillance, search and rescue, and transport missions and can be outfitted with mission system pallets, a roll-on, roll-off suite of electronic equipment that enables the aircrew to compile data from the aircraft’s multiple integrated sensors to transmit and receive both classified and unclassified information from other assets including other aircraft, surface vessels and shore facilities.

With multiple voice and data communications capabilities and satellite communications, the HC-144 is contributing, via a networked command and control system, to the common tactical picture and common operating picture. The aircraft is also equipped with a vessel automatic identification system, direction finding equipment, an electro-optical/infrared system and a multi-mode search radar to improve the Ocean Sentry’s situational awareness and responsiveness.

The Coast Guard is also in the process of receiving and missionizing 14 C-27J aircraft that are being transferred from the US Air Force under the direction of the National Defense Authorization Act, Fiscal Year 2014. The service plans to operate a total 22 C-130Js. 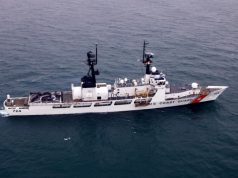 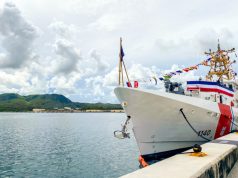