Japan has launched the fifth Mogami-class frigate JS Yahagi in a naming and launching at the Nagasaki Works shipyard of Mitsubishi Heavy Industries (MHI).

Launched on June 23, Yahagi – which derives its name from a river that flows through Nagano, Gifu, and Aichi prefectures – the ship is one of 22 units in its class. The frigates will be built and delivered by MHI, who remained the only contractor on the program after taking over Mitsui’s warship building business in March 2021.

The launch of future JS Yahagi follows the commissioning of the first two units in the class, in March and April this year. JS Kumano, the second ship in the class, was the first to enter service on March 22, while the lead ship was commissioned on April 28.

Also referred to as the multi-mission frigate (FFM) program, Japan’s Mogami-class will be “frigate-sized vessels with destroyer capabilities.”

FFM ships displace over 5,000 tons at full load and combine compactness with manpower saving, with which JMSDF hopes to address its personnel shortage issues. The vessels will be crewed by some 100 sailors, a notable decrease compared to conventional and Aegis destroyers.

The frigates will be powered by Rolls-Royce MT30 gas turbines and MAN diesel engines, propelling them to speeds of over 30 knots.

What is more, the frigate-class will be the first JMSDF asset to serve as a “mother ship” for unmanned underwater and unmanned surface vehicles (UUV and USV). The frigates will employ the unmanned capability for mine countermeasures operations. 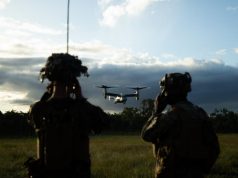 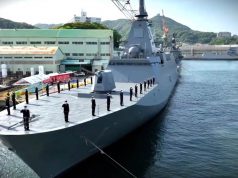 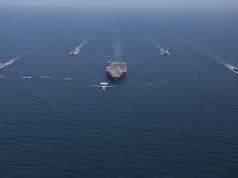