The latest tranche of military assistance that will be shipped from the United States to Ukraine will include additional High Mobility Artillery Rocket System (HIMARS) launchers, ammunition and more coastal and riverine patrol boats, the Pentagon said Thursday.

The military equipment, valued at up to $450 million, is the thirteenth drawdown of equipment from DoD inventories for Ukraine since August 2021.

According to the Pentagon, the US has now committed approximately $6.8 billion in security assistance to Ukraine since the beginning of the Biden Administration, including approximately $6.1 billion since the beginning of Russia’s unprovoked invasion on February 24. Since 2014, the United States has committed more than $8.7 billion in security assistance to Ukraine.

The commitment to send more HIMARS to Ukraine follows the confirmation of Ukraine’s minister of defense Oleksii Reznikov earlier this week that the first HIMARS had already arrived in Ukraine.

The latest announcement also follows a $1 billion tranche from a little over a week ago, which will include Harpoon coastal defense missile launchers, howitzers, and HIMARS ammunition.

“As president Biden told president Volodymyr Zelenskyy when they spoke last week, the United States will continue to bolster Ukraine’s defenses and support its sovereignty, its territorial integrity,” National Security Council Coordinator for Strategic Communications John Kirby said at the White House today. “The bravery and determination of the Ukrainian armed forces, let alone their fellow citizens, continues to inspire the world and we are committed to standing with them as they fight for their freedom.”

He noted that for the first time, the summit will include Indo-Pacific leaders from Australia, Japan, New Zealand and the Republic of Korea. This makes clear “that whether it’s in Europe or the Indo-Pacific region, the United States and our allies and partners will defend the principles of sovereignty and territorial integrity.” 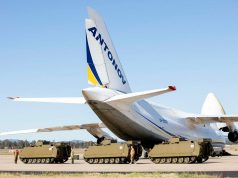