With an estimated value of $867 million, this contract award delivers the defensive weapon capability for the US Navy to destroy short- to intermediate-range ballistic missiles.

Moreover, this SM-3 Block IIA procurement provides a capability to intercept regional ballistic missile threats when launched and guided by the Aegis weapon system carried by US destroyers, and brings significant performance improvement over previous generations of the SM-3 and Aegis weapons system.

MDA said this contract captured the program’s incremental production acquisition objective with the plan to execute the full production for fiscal year 2023 and beyond.

The contract award also follows a successful demonstration from late 2020, when the missile demonstrated it was capable of defeating intercontinental ballistic missile (ICBM) targets.

“This contract award is a significant milestone for the Aegis weapons system because the production and deployment of the SM3 BLK IIA will provide the warfighter with the increased ballistic missile defense capability they need to protect themselves, US forces and allies,” said MDA Director, Vice Admiral Jon Hill.

The Aegis ballistic missile weapons system is the naval component of the US Missile Defense System. The MDA and the US Navy cooperatively manage the Aegis BMD system. Aegis BMD ships (and Aegis Ashore) receive track data via the C2BMC system, build the fire control solutions, then launch and guide the SM-3 family of missiles to destroy incoming threats.

According to Raytheon, the SM-3 “kill vehicle” hits threats with the force of a 10-ton truck traveling 600 mph. This technique, referred to as “hit-to-kill,” has been likened to intercepting a bullet with another bullet.

The program has over 30 successful space intercepts, and more than 400 interceptors have been delivered to US and Japanese navies, according to the company.

The Block IIA variant MDA ordered with this contract has two distinct new features: larger rocket motors that will allow it to defend broader areas from ballistic missile threats and a larger kinetic warhead. As explained by Raytheon, the interceptor’s kinetic warhead has been enhanced, improving the search, discrimination, acquisition and tracking functions, to address advanced and emerging threats. 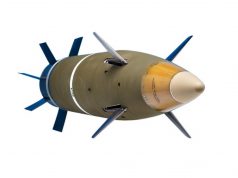