Socarenam, the French shipbuilder in charge of delivering six new-design overseas patrol vessels for the French Navy under a contract awarded in December 2018, has shared first photos of the vessel design.

Patrouilleurs Outre-Mer (POM), as the vessels are referred to in French, will be based in French Polynesia, New Caledonia and Reunion. The shipbuilder said it would work with naval architecture and marine engineering company Mauric to deliver the vessels between 2022 and 2025.

POMs will measure 80 meters in length and will embark up to 53 personnel. The ships will be equipped with the Airbus Helicopters VSR700 unmanned aerial vehicle, which completed first flight trials recently, and the capability to deploy response boats in addition to supporting diving operations.

The vessels will be replacing the Le Malin and Arago vessels that are already stationed in the regions.

The purchase of six POM ships is part of France’s plan to renew all vessels operating in French overseas territories between 2017 and 2025.

France has also ordered new D’Entrecasteaux-class, Bâtiment multi-mission in French (B2M), that are based in Noumea, New Caledonia, Tahiti, Réunion, and Fort-de-France, Martinique. The ships are carrying out overseas missions of sovereignty, law enforcement and logistic support missions. 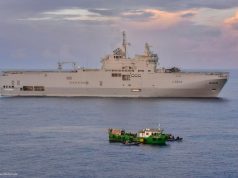