The latest delivery is part of a contract signed in 2016, that will see Ukroboronprom hand over a total of 45 units to Ukrainian armed forces.

Developed in Ukraine and first unveiled in 2006, the BTR-4 entered serial production in 2008.

The latest version that is being delivered to the Ukrainian armed forces bears the designation BTR-4E and features enhanced protection. The army has so far received 23 of the amphibious 8x8s since deliveries started in December 2019.

The vehicle is designed for the transport of infantry personnel and can provide fire support in combat operations. The BTR-4 is armed with 30 mm coaxial machine guns and can be fitted with remote-controlled weapon stations and anti-tank missiles.

According to Ukroboronprom specifications, the 22-ton vehicle has a crew of 3 to 7 service members and a top speed of 110 km/h. 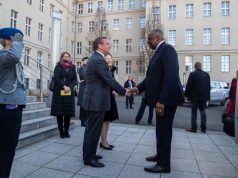