US president Donald Trump should refrain from leaving the Open Skies Treaty which has allowed its members to gather information on each other’s military forces and activities through aerial surveillance for nearly two decades, a group of retired military leaders has said in an open letter.

“We strongly urge all parties to uphold the treaty and to use all relevant channels for dialogue to resolve their disputes,” it was said.

“Throughout its operation, the treaty has increased military transparency and predictability, helped build trust and confidence, and enhanced mutual understanding.”

ELN further noted that Washington profits from this “military-to-military engagement tool” as it contributes to greater transparency and stability in the Euro-Atlantic region. While the intelligence and confidence building advantages are limited for the United States itself, they are very real for America’s NATO allies.

The organization also cautioned that a US withdrawal would prevent the United States from overflying Russia but would leave Russia still able to overfly American military activities and installations in Europe. US departure would also further weaken the international arms control architecture and be a further blow to any global sense of stability.

“We welcome the fact that a 19 February 2020 US-Estonian-Lithuanian flight over Kaliningrad took place. State Parties should remove all restrictions that they have unilaterally imposed on Open Skies flights. We thus call on all parties to refrain from restricting the total distance of observation flights or prohibiting overflight over certain territories,” the group of former military leaders said. 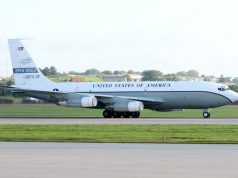