Israeli Air Force pilots landed in Germany for the first time ever on August 17, ahead of the start of the two-week Blue Wings exercise.

Around 180 Israeli soldiers are in Germany where German Air Force Eurofighters and Israeli F-16s will train side by side in joint air operations.

At the invitation of the German Air Force Inspector General, Lieutenant General Ingo Gerhartz, German and Israeli fighters will take part in joint air operations during the first week of the Blue Wings exercise. In the second week, the Israeli partners will take part in the Multinational Air Group Days (MAG Days), which take place several times a year.

A joint historic flight over Fürstenfeldbruck, the site of the 1972 Munich massacre, is also planned, while German defense minister Annegret Kramp-Karrenbauer will lay wreaths at the Dachau concentration camp memorial site with the two air force chiefs and the Israeli ambassador to commemorate the atrocities of the Nazi regime.

The German Air Force has already participated twice in the Israeli-based multinational exercise Blue Flag – the last time in November 2019. In addition, the two air forces have been working closely together for years in the Heron training program. 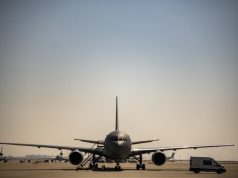