The US State Department has approved the sales of AGM-114R2 Hellfire missiles and AIM-120C-8 Advanced Medium Range Air-to-Air Missiles (AMRAAM) to the governments of the United Kingdom and Japan.

The UK is looking to buy 395 Hellfire missiles with support for an estimated cost of $46 million. The approval follows an earlier one from 2017, when the agency cleared the sale of 1,000 Lockheed Martin-built missiles. The missiles are used by the Royal Army on its Apache helicopters.

“The proposed sale will improve the United Kingdom’s ability to meet current and future threats by replacing expiring and unserviceable missiles and maintaining capability to execute missions across a full range of military operations,” the US defense security cooperation agency (DSCA) said in an announcement.

The announcement did not say which Japan Air Self Defense Force aircraft types will carry the missile, but the AMRAAM has been integrated on a wide range of aircraft, including the F-35.

The main contractor for the AMRAAM sale would be Raytheon Missile Systems. 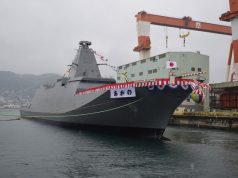