The Brazilian Air Force has taken delivery of the final upgraded F-5M fighter from Embraer Defense in a ceremony at the company’s Gavião Peixoto plant.

The aircraft delivery on October 14 marked the completion of a 15-year program that saw the company overhaul a total of 49 Northrop Grumman-built light fighters.

Embraer was responsible for fitting the ageing aircraft with Italian Grifo F multimode radars, electronic countermeasures and the capability to employ a range of modern missiles and laser-guided bombs. The overhaul will allow the aircraft to remain in service into the 2030s.

Brazil started operating the aircraft in 1975 after ordering the first 42 units a year before. In 1988, the country bought additional aircraft in the form of used F-5s from the US Air Force and subsequently from Jordan. Northrop Grumman built well over a thousand of F-5 fighters that saw service with close to twenty countries.

The Brazilian Air Force delegation that travelled to Embraer’s plant to take delivery of the final modernized F-5 Tiger II was also introduced to the first of the new generation of aircraft the South American country is buying from Sweden. Swedish defense and aerospace major shipped the first Gripen E fighter to Brazil in September this year. Brazil is buying 36 Gripen E and F models under a contract from 2014. Gripen E deliveries will start in 2021 and the two two-seater Gripen F in 2023. 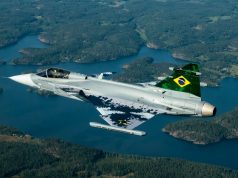 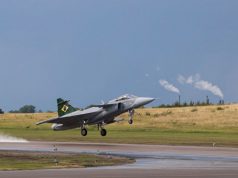 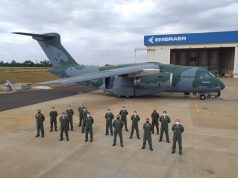