The commissioning ceremony took place after the boat was delivered in February this year by Mazagon Dock Shipbuilders Limited, the Indian shipbuilder building the six submarines in the class under a transfer of technology agreement with French shipbuilder Naval Group.

More interestingly, the ceremony follows an announcement on India’s breakthrough in the field of air-independent propulsion (AIP) technology. On March 9, the country’s research and development organization (DRDO) said it had tested an AIP system on a land-based prototype.

Air-independent propulsion in diesel-electric submarines allows them to stay submerged for longer periods of time as they do not need to surface as often for air. This enhances their stealth characteristics.

DRDO says the tests showed that the indigenously developed AIP was ready for installation aboard ships. The agency did not provide details on whether all six submarines will be retrofitted with the technology or when the undertaking would start.

India has so far launched five Scorpene or Kalvari-class submarines and expects to receive all boats in the class by 2023. 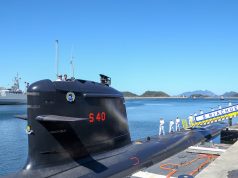