The ceremony, hosted by shipbuilder Japan Marine United who built the two ships in the class, was attended by the Japanese defense minister Nobuo Kishi and other navy officials.

Named after Mount Haguro, DDG 180 was handed over to JMSDF after being launched in July 2019 and starting sea trials in 2020. JS Maya, the lead ship in the class, entered service in March 2020.

Maya-class destroyers are an upgraded version of the Atago-class, equipped with the Aegis Baseline 9/Ballistic Missile Defense 5.1 system and Raytheon’s Cooperative Engagement Capability (CEC), a system that shares/compiles sensor data from multiple platforms into one picture. By commissioning the two destroyers, Japan is joining an exclusive club of countries with the CEC capability. In addition to the US and Australia, which operate Raytheon’s CEC, France is the only other country to have developed this capability.

Haguro is the eighth JMSDF ship to carry the Aegis combat system. Prior to the Maya-class, Aegis was carried by Atago- and Kongo-class destroyers.

JS Maya and JS Haguro are the largest JMSDF destroyers built so far, which will enable Japan to integrate and test railguns and laser systems on the ships.

The new class of destroyers will launch SM-3 Block IIA missiles that are capable of defending against short- and intermediate-range ballistic missiles.

The SM-3, along with a range of other missiles including the Type 07 vertical launch anti-submarine rocket, will be launched by a 96-cell Mk-41 vertical launching system/VLS. The ships are also armed with a 5-inch gun, Harpoon anti-ship missiles, torpedoes and close-in weapons systems. 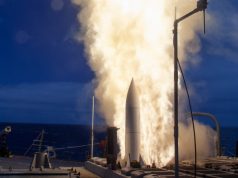 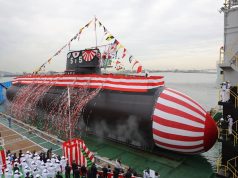