French shipbuilder Naval Group delivered the first of two FREMM frigates with improved air-defense capability to the French Navy in a ceremony in Toulon on April 16.

The shipbuilder handed over FS Alsace in a ceremony attended by the country’s armed forces minister Florence Parly, alongside other navy and defense officials.

Alsace will protect major units such as the Charles de Gaulle aircraft carrier, or Mistral-class landing helicopter docks, within the framework of a naval air and amphibious group.

In addition to the Aster 15 and 30, Alsace also carries Exocet MM 40 anti-ship missiles and MU 90 torpedoes. Like the other units of the FREMM series, she can embark an NH90 helicopter (Caïman Marine).

As outlined by the shipbuilder, Alsace and the final ship in the class – Lorraine – will be able to carry 8 Excocet MM40 Block 3 missiles, 32 Aster missiles launched from the Sylver vertical launch system, a 76 mm main gun, and 19 torpedoes.

Alsace is the seventh of overall eight ships in its class ordered by the French Procurement Agency (DGA) on behalf of the French Navy. Naval Group began work on the ship in February 2018 and launched it in April 2019. The frigate started sea trials in October 2020.

Naval group expects to deliver the final frigate in the class next year. 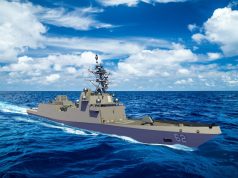