German shipbuilder thyssenkrupp Marine Systems (TKMS) has handed over the second of four SA’AR 6 corvettes to the Israeli Navy.

The handover ceremony for future INS Oz was held in Kiel on May 4 and was attended by Jeremy Issacharoff, the Israeli ambassador to Germany, and Israeli Navy Rear Admiral Ariel Shir.

“Today is a great and historic day for the State of Israel, the Israel Defense Forces and of course the Israeli Navy. This is a day when a vision becomes reality. A day when we can see this vision in all its grandeur, thanks to the hard work tirelessly contributed by so many,” Rear Admiral Shir commented.

TKMS delivered INS Oz to the Israeli Navy some 20 months after it was launched in August 2019. The lead ship, INS Magen, was handed over to Israel in November 2020.

TKMS is building four SA’AR 6-corvettes for Israel in a joint venture with German Naval Yards Kiel under a contract from May 2015. The remaining two units of the series are also scheduled for delivery in 2021.

“As the first ship in the history of the Israeli Navy with this name, the “INS Oz” will establish a new tradition. We are convinced of this here at thyssenkrupp Marine Systems, because she has everything it takes. We are very proud that, after the first-of-class, this is now the second vessel to receive this honor,” Dr. Rolf Wirtz, CEO of thyssenkrupp Marine Systems, added.

Based on the German Navy K130 corvettes, SA’AR 6 ships incorporate stealth design features and measure 90 meters in length. They will carry an Oto Melara 76 mm main gun, vertical launch cells for Barak-8 surface-to-air missiles, and anti-ship missiles. They will also have torpedo launchers and a helipad and hangaring space for an embarked helicopter.

As highlighted by the Israeli Defense Force, the SA’AR 6-class will be the country’s most advanced ship yet, and will be in charge of protecting the country’s 200-mile exclusive economic zone and gas platforms in the Mediterranean Sea. 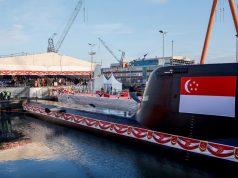 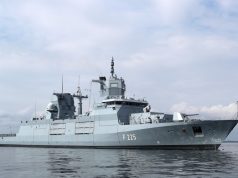