ADSB, a subsidiary of the defense technology conglomerate EDGE Group, said the new contract was the largest-ever order received by the shipbuilder.

“This order represents a resounding vote of confidence in ADSB from the MOD and the UAE Navy,” Khalid Al Breiki, Chairman of ADSB and president – Mission Support, EDGE said. “The contract will provide the company with a platform for sustainable profitable growth, while maintaining strategic national assets that are critical to the defense of the UAE.”

ADSB previously built the UAE Navy’s Baynunah-class corvettes in cooperation with French shipbuilder CMN. The first unit was built in France and the others in the UAE. Deliveries were completed in 2017.

The shipbuilder said it plans to start work on the Falaj-3 class multi-mission OPVs this year, while deliveries are scheduled to be completed within the next five years.

According to shipbuilder specifications, Falaj 3 is a 60-meter vessel capable of operating in both littoral and blue waters. Powered by 4 engines using 4 propellers, the ships attain speeds in excess of 26 Kn. They are equipped with integrated platform management systems and can deploy a rigid hull inflatable boat.

The ships are expected to be equipped with a naval gun, as well as missile systems and decoys. 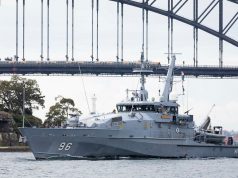 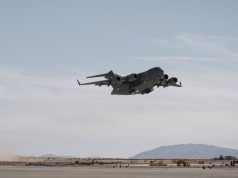