A US Air Force A-10 Thunderbolt II aircraft from the Indiana Air National Guard’s 122nd Fighter Wing recently got a black and grey makeover which resulted in a livery that has drawn a lot of attention and admiration over the past few days.

The Blacksnakes of the 122nd Fighter Wing conceptualized the sleek design in order to commemorate 100 years of aviation in the Indiana National Guard.

Indiana’s two Air National Guard units, the 122nd FW in Fort Wayne and 181st Intelligence Wing in Terre Haute both have a long history of flying single seat fighter aircraft in the Hoosier State. The creators of the design venerated both the Blacksnakes of the 122nd FW and the Racers of the 181st IW as part of the A-10 paint scheme.

The paint scheme on the A-10 is a mixture of black and dark grey with colors breaking along standard A-10 paint lines on the wings, engines and fuselage. The nose of the aircraft is wreathed with a distinctive 122nd FW green eyed snake, complete with fangs, surrounding the aircraft’s 30mm rotary cannon.

One side of the aircraft has a 122nd FW tail flash with the text, “Fort Wayne” embossed in yellow over Indiana state-flag-blue background. The opposite tail flash shows a “Racers” checkered flag with the text “Terre Haute” of the disbanded 181st Fighter Wing, now the 181st intelligence Wing.

The distinctive A-10 twin engines are embossed with an Indiana ANG centennial logo displaying the text “Indiana Air National Guard” under a large number “100,” along with the years “1921-2021.”

Although the Air National Guard was not officially established as a separate service until after the 2nd World War in 1946, some ANG units like the 122nd can trace their beginnings to the interwar period.

Following the First World War, the War Department recognized the necessity of including aviation in national defense. The Indiana National Guard began their flying mission in 1921 with the establishment of the 137th Observation Squadron that was initially based at Fagley Field in Kokomo, Ind. just north of Indianapolis.

Now located in Fort Wayne, the 122nd FW has been flying single seat fighter aircraft for most of its history. Today the Blacksnakes are equipped with the U.S. Air Force A-10 Thunderbolt II, which is used primarily for close air support.

Also known as “Mad” Anthony Wayne, Native Americans gave Wayne the title “Black Snake.” Wayne was known for a methodical fighting style where he instructed his soldiers to lie in wait for the right moment to strike, similar to the actions of a North American Black Snake.

“The Blacksnakes are proud of the names historical significance and connection it gives us to our local community and home town of Fort Wayne,” said Hopper.

The uniquely painted A-10 may soon begin showing up at air shows, where it will be fulfilling its purpose in promoting the mission and heritage of the Air National Guard.

Units of the Air Force and Air National Guard can get permission to temporarily paint non-standard markings on aircraft as part of unit heritage and moral programs.

The 122nd A-10 paint scheme is one of several commemorative liveries recently painted by the ANG paint facility as many Air Guard units have been celebrating significant anniversaries. The Air National Guard paint facility is part of the Iowa Air National Guard’s 185th Air Refueling Wing in Sioux City and has been painting small fighter aircraft since the 1990’s. 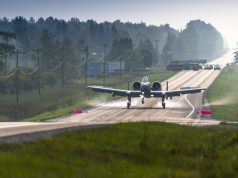 A-10s will be landing on a public highway once again