The US State Department has issued a statement saying that available information points to Iran as the likely perpetrator of the deadly unmanned aerial vehicle (UAV) attack on oil tanker Mercer Street in the north Arabian Sea on July 30.

The US was the first to respond to the attack. US Navy sailors boarded the Liberian-flagged vessel while aircraft carrier USS Ronald Reagan escorted it in the international waters of the Arabian Sea.

While Israel immediately pointed to Iran as the culprit, the US refrained from making assumptions.

“Upon review of the available information, we are confident that Iran conducted this attack, which killed two innocent people, using one-way explosive UAVs, a lethal capability it is increasingly employing throughout the region,” the State Department said.

It added that the attack follows a pattern of attacks and other belligerent behavior, which threatens freedom of navigation through the waterway, international shipping and commerce.

“We are working with our partners to consider our next steps and consulting with governments inside the region and beyond on an appropriate response, which will be forthcoming,” the statement further said.

Israeli prime minister Naftali Bennett confirmed the US conclusion, saying that Israel had intelligence evidence that Iran was behind the incident.

“The thuggish behavior of Iran is dangerous not only to Israel but also to the global interest in freedom of shipping and international trade,” Bennett said.

Iran continues to deny its involvement in the attack, with the country’s foreign ministry spokesperson saying that “the illegitimate occupying regime of Israel must stop the false accusations.” 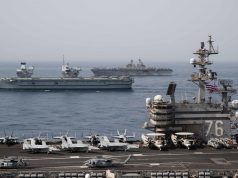 US, UK flattops meet up in Gulf of Aden 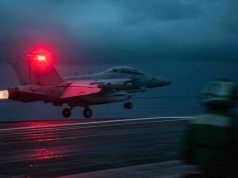 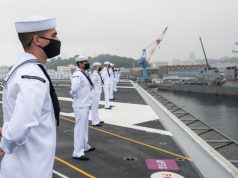