Dubbed the Kargo UAV, the system is the newest addition to the company’s family of autonomous unmanned systems.

Kargo UAV’s compact form-factor fits in a standard shipping container and is designed to be unloaded and operated by as few as two people, according to Kaman.

“The Kaman Kargo UAV is the only system of its class that is purpose-built to provide deployed marines, sailors, airmen, soldiers, and Coast Guard autonomous resupply in the lethal, fluid combat environment that future military operations will entail or for regular logistics missions,” said Ian Walsh, CEO of Kaman Corporation.

Kargo UAV features a conformal transport pod but can also be used in an external sling load configuration. It can transport payloads of up to 800lbs at distances of up to to 523 nautical miles.

The company says it completed flight development testing of a scaled Kargo UAV demonstrator over the past six months to prove out the air vehicle design. Flight-testing of a full-scale autonomous vehicle is planned for 2022.

The Kargo UAV leverages commercial off-the-shelf components as well as thousands of hours of automated and autonomous flight data from Kaman’s K-MAX TITAN program, to reduce schedule and technical risk.

Kaman selected Near Earth Autonomy as a partner on the pilot Kargo UAV program. Near Earth will provide obstacle avoidance and other technologies such as precision landing, sense and avoid, and navigation in a GPS-denied environment.

“We are extremely excited to provide this advanced, game-changing technology to the market and leverage Kaman’s 75 years as a pioneer in aerospace and defense. Our vision is to propel our customers forward by imagining and delivering highly engineered products that solve our customer’s toughest problems,” stated Darlene Smith, president of Kaman Air Vehicles. 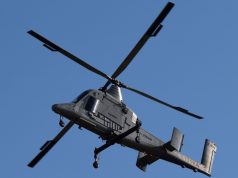