The project is aimed at revitalizing the Canadian Army’s light and heavy logistics vehicle capabilities.

Dubbed Team 45⁰ North (45⁰N), the teaming between Rheinmetall, RMMV, and Navistar brings together two military vehicle manufacturers and an integrator to offer the Canadian Army “battle-tested trucks that are purpose-built for military use.”

The company also supplied the Royal Canadian Mounted Police (RCMP) with armored personnel carriers to provide increased protection and rescue capabilities for RCMP officers and members of the public in high-risk situations.

The LVM project will acquire new fleets of light and heavy logistics vehicles, trailers, vehicle modules, and armor protection kits. This new, modern fleet will be able to carry a larger load, be more mobile, and provide increased protection to help ensure the CAF can continue meeting national and global missions.

In addition to Rheinmetall and Navistar, other competitors in the program include General Dynamics Land Systems, Iveco Defence Vehicles, Mack Defense, and Oshkosh Defense. 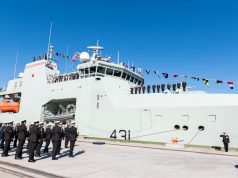