According to the navy, the three-masted vessel, also referred to as a tall ship, was on a routine instruction cruise when it was called upon to aid the operation on October 22.

While the wind-powered ship could not have kept pace with the low-profile boat with three outboard engines, it likely aided the Ecuadorian national police and the unit for the fight against organized crime (ULCO) in processing the smugglers and the trafficked narcotics.

The navy said that four smugglers had been apprehended, one Colombian and three Ecuadorians. The vessel itself will be transported to shore and handed over to relevant authorities. A statement did not specify the amount or type of narcotics captured.

The artisanal low-profile high-speed vessel belongs to a wider family of narco submarines popular with drug traffickers in South America. They are capable of travelling at high speeds while maintaining low visibility due to their paint and low profile in the water.

While the majority of the vessels are never fully-submersible, authorities uncovered an elaborate electric submarine that would have been capable of transporting tons of narcotics unobserved, had it sailed. 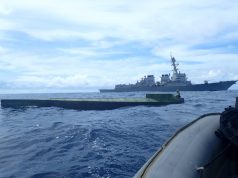 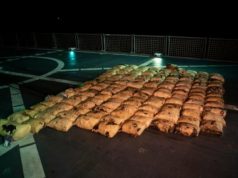