The Republic of Korea Navy has launched its seventh Daegu-class (FFX-II) frigate in a ceremony at the Hyundai Heavy Industries’ shipyard in Ulsan on November 9.

What makes this frigate special is the fact that it is named after the Pohang-class corvette Cheonan, which was torpedoed near the Northern Limit Line, a border between North and South Korea, in March 2010. The sinking, for which South Korea blames the North, claimed the lives of 46 sailors.

North Korea continues to deny involvement in the incident but an international investigative team assembled by South Korea determined that the most likely cause of the sinking was a North Korean torpedo launched by a midget submarine.

The new Cheonan is a 2,800-ton frigate equipped with a 16-cell Korean vertical launching system for defense against air threats and six torpedo tubes for anti-submarine warfare. Also included are naval guns and a Phalanx close-in weapon system.

Daegu-class ships also feature a hangar and a helicopter deck capable of hosting and operating a 10-ton helicopter.

South Korea has awarded contracts for all eight ships in the class. DSME is delivering the first, second, fifth and sixth units, while HHI is building the third, fourth, seventh and eighth frigate. 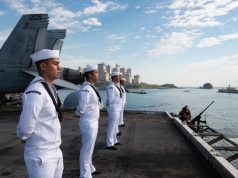