The deal for the airframes was announced by Airbus during the Dubai air show that is taking place between November 14 and 18.

With deliveries starting in 2024, this agreement will also cover the upgrade of the country’s current A330MRTT fleet to the latest enhanced version, the company said.

“This repeat order, added to the growing MRTT customer base, confirms the suitability of our platform as the world’s tanker of reference,” said Bernhard Brenner, executive vice president marketing and sales at Airbus Defence and Space.

UAE ordered the first three units in 2008 and received them in 2013. The UAE also ordered five Airbus C295 medium transport aircraft in November 2017, which were scheduled to start deliveries in late 2018.

The A330 MRTT is an aerial refueling tanker of choice for 12 nations, with a total of over 60 aircraft on order since the program start. Based on the civilian A330, the MRTT is interoperable with receivers worldwide and delivers multi-role capabilities. The company is also working on introducing an automatic refueling capability to the airframe and has already completed the development phase. 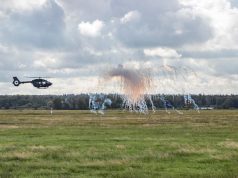