HMS Cutlass, the first of two new fast patrol boats that will patrol the British Overseas Territory of Gibraltar, has arrived at its homeport and is ready for testing by the Royal Navy.

The boat has been delivered to the naval base ahead of patrols of territorial waters as part of a £10m investment in the Gibraltar Squadron to upgrade its craft.

Cutlass – and her sister Dagger, due to be delivered in the spring of 2022 – are the permanent replacements for HMS Sabre and Scimitar which safeguarded Gibraltar’s waters for nearly two decades.

They returned to the UK in the summer of 2020, since when HMS Dasher and Pursuer have acted as the principal Royal Navy presence around Gib, joining the squadron’s Pacific 24 RIBs on patrols.

“We are delighted with the arrival of HMS Cutlass,” said the boat’s first Commanding Officer, Lieutenant Commander Adam Colman.

“This week, she will begin a series of trials under the Blue Ensign to further test her capabilities in the theatre she will operate in. Once these trials are complete, she will conduct the Royal Navy’s safety and readiness checks which will ensure the vessel and crew are ready to conduct operations.”

Built by Merseyside-based Marine Specialised Technology, whose team is working with the RN squadron to introduce Cutlass into service, the new boats are 19 metres long – slightly longer than Sabre and Scimitar, slightly shorter than Dasher and Pursuer – can hit speeds of 40 knots and are equipped with three machine-guns and the latest electronic/optical equipment to assist in identifying potential threats.

Once the training and trials are complete, Cutlass will be commissioned and hoist the White Ensign.

The boats will initially carry three multi-purpose machine guns, and will be “fitted for but not with” 0,50 cal heavy machine guns. At a length of 19 meters, they will have a top speed of 40 knots and have the capacity to transport 6 personnel in addition to 6 crew. 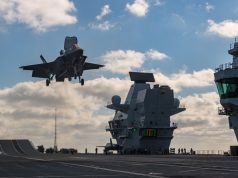