Belgium and the Netherlands have officially started the construction phase of their joint mine countermeasure ship project with a steel-cutting ceremony in France.

Taking place at the Piriou shipyard in Concarneau, France, on November 30, the ceremony marked the start of construction of future BNS Oostende, the first of 12 MCM vessels that will be built for the navies of Belgium and the Netherlands.

On the same day, the two countries announced that all 12 units ordered under a contract from 2019 would be named after major port cities.

BNS Oostende is scheduled to be delivered by 2024, and will be followed by ships named Tournai, Brugge, Liège, Antwerp and Rochefort. Dutch ships will be named Vlissingen, Scheveningen, Ijmuiden, Delfzijl, and Schiedam.

All of them will be delivered by around 2030, by the Belgium Naval & Robotics consortium – composed of Naval Group and ECA Group.

The ships will displace 2800 tons and will be geared for mine warfare with acoustic and electromagnetic discretion, as well as shock resistance features. Each ship will be equipped with complete drone systems (toolboxes) that will comprise over a hundred underwater, surface and aerial drones fully dedicated to mines countermeasures.

All these drones will have the ability to be operated autonomously from the Inspector 125.

The drone system also includes unmanned aerial vehicles (UAVs) and influence sweeps. The UAV that will be flown by the ships will be delivered by UMS Skeldar, under an agreement from July 2020.

The consortium has also finalized agreements for the delivery of Bofors 40 Mk4 lightweight naval guns for the ships, as well as SCANTER 6000 radars. 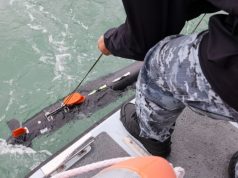