The US Navy has awarded the Bell Boeing Joint Program Office a $1.6 billion contract to support the maintenance of 228 Osprey tilt-rotor aircraft in service with the US military.

The company will be responsible for the repair, replacement, required availability, configuration management, and inventory management as part of the supply support operations.

The contract will include a five-year base period, with the majority of the work to be performed in Fort Worth, Texas.

Bell-Boeing is building different variants of the V-22 Osprey for the US Navy, Marine Corps, Air Force and the Japan Ground Self Defence Force (JGSDF).

Thanks to its unique ability to fly both vertically and horizontally, the V-22 is a complicated aircraft to maintain. A great portion of the aircraft maintenance is spent on the nacelles, which house the power and propulsion components of the aircraft. The conversion area includes complex wiring bundles routing from each nacelle, feeding power through various elements of the aircraft. Together, the nacelles and harnesses consume approximately 60 percent of maintenance man hours. This issue has been addressed by the Air Force Special Operations Command (AFSOC) community, whose Ospreys were bound to receive nacelle modification kits in late 2021, with other variants set to follow soon after. 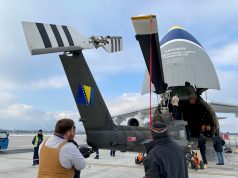