With the order, Indonesia is becoming the seventh international customer for the aircraft and the second customer in the Indo-Pacific. The first is India with a 36-airframe order from 2016.

Financial aspects of the contract, which marks the end of Indonesia’s years-long search for a successor to the F-5E/F Tiger fighter aircraft, were not revealed.

The contract signing ceremony took place on February 10 in Jakarta, Indonesia, and was attended by the two countries’ defense ministers, Florence Parly and Prabowo Subianto, as well as representatives from Dassault Aviation and the Indonesian Air Force.

Commenting on the contract signing, the French defense minister revealed that Indonesia also signaled an interest in buying two French Scorpene submarines. It should be noted that Indonesia already has three South Korean-built Nagapasa-class submarines on order, with a potential order for three more units.

“Our strategic partnership will benefit from the deepening of our defense relations. France is proud to contribute to the modernization of the armed forces of our partner, which plays a key role within ASEAN and in the Indo-Pacific,” Parly said.

“Our cooperation also extends to the naval field: Indonesia has announced an intention to purchase two French-made “Scorpène” submarines.”

Indonesian industry will benefit from an industrial return, not only in the aeronautical sector, but also in all the other areas of cooperation relating to the portfolio of dual technologies mastered by Dassault Aviation and its industrial partners, Safran Aircraft Engines and Thales, the company said.

“It is a great honor for Dassault Aviation to see the Rafale join the highly prestigious Tentara Nasional Indonesia Angkatan Udara air force, and I would like to thank the Indonesian authorities for the trust they have placed in us,” said Eric Trappier, Dassault Aviation CEO. 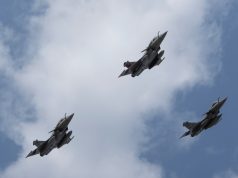