The Australian government announced an investment of up to A$4.3 billion (approx. US$3.09B) to deliver Western Australia’s first large-vessel dry berth at the Henderson shipyard.

Government-owned Australian Naval Infrastructure will oversee the design and build of this infrastructure, with work to start in 2023 and initial operations to begin in 2028.

The investment into Western Australia follows an earlier announcement, which will see the country build a new submarine base on the east coast. The new base will be capable of supporting the new nuclear-powered submarines that will be bought for the Royal Australian Navy as part of the country’s AUKUS agreement with the United States and United Kingdom.

The Commonwealth will work closely with the Western Australian government and industry to develop a master plan for the defense precinct at Henderson.

“This investment in WA’s future will ensure we can build, as well as sustain larger vessels in Australia, turbocharging our national naval shipbuilding endeavour and creating thousands of job opportunities for West Australians,” the prime minister said.

“Henderson, HMAS Stirling and Fleet Base West all form a key part of our maritime capability and our nation’s security, particularly given the strategic importance of the Indian Ocean, and will continue to do so for decades to come.”

“The Morrison government is committed to delivering the sovereign shipbuilding outcomes outlined in the 2020 Force Structure Plan and the 2017 National Naval Shipbuilding Plan, and Western Australia is central to them,” minister Dutton said.

“This decision will ensure that we can meet the Navy’s future requirements as we undertake the enormous investments in the maritime capabilities we need to keep our nation safe in the decades ahead.”

Australia’s finance minister Simon Birmingham added that utilizing Australian Naval Infrastructure for the design and build of this facility would be crucial to maintaining sovereignty in the country’s shipbuilding and sustainment infrastructure.

“Using ANI as our partner in the Henderson dry dock ensures we capture their experience from the Osborne Shipyard and maintain maximum sovereignty and flexibility in design, construction and management of this future facility in the decades to come,” minister Birmingham said. 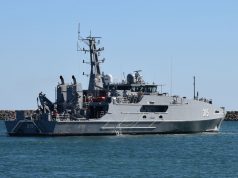