Future ITS Paolo Thaon di Revel, the lead ship of a class of seven vessels, was delivered at the shipbuilder’s Muggiano shipyard after starting trials in November 2019.

ITS Paolo Thaon di Revel had been scheduled for delivery in May 2021, and commissioning in November 2021. While the ship will now enter service with after several months of delay, it is not uncommon for lead ships of new vessel classes to experience delays.

According to information from the Italian Navy, three ships in the class were undergoing sea trials as of February this year. A fourth ship in the class, future ITS Giovanni delle Bande Nere, was launched in the same month.

Italy is building a total of seven ships in the class, in three different configurations. The “light” configuration is equipped for patrolling tasks and contains basic self-defense capabilities, the “light+” adds the anti-air capabilities while the “full” version is capable of handling three-dimensional threats (air, surface and underwater).

The light version has a complete set of artillery and is developed with the “fitted for” approach that makes it able to quickly deploy growing operational capabilities. The Light+ version adds the missile firing capability with actuators planned also for ballistic missile defense. The full version will be able to operate in every naval warfare domain.

When it comes to armament, PPA ships will field OTO Melara 127/64 LW Vulcano and 76/62 medium-caliber guns. In the full configuration, the ships will carry the SAAM-ESD surface anti-air missile-extended self-defense (SAAM-ESD) system and the Teseo anti-ship missile system. 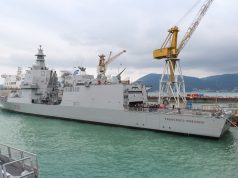 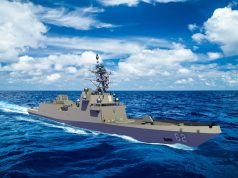