The company says the “sub-to-air” system has proven capabilities in underwater-to-air transition for beyond-line-of-sight situational awareness.

Designed for undetectable underwater launch, the Ninox is an autonomous, AI-based system that was unveiled at the Undersea Defence Technology exhibition in Rotterdam, Netherlands.

What makes this system unique is its ability to depart a submarine and launch from the surface with a delay of up to 24 hours.

The UAS has a range of up to 10 kilometers, and an endurance of around 40 minutes with a 1 kg dual sensor (electro-optical/infrared) payload.

While the company says that Ninox is the world’s first sub-to-air loitering UAS, it is not the first submarine-launched UAS. The US Navy is already buying the Blackwing 10C UAS from AeroVironment as part of its submarine-launched unmanned aerial system (SLUAS) program, which is aimed at providing a low-cost solution for operations in anti-access/aerial denial (A2/AD) environments. 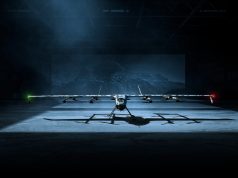