Australia will be sending an additional 20 Bushmaster protected mobility vehicles to Ukraine as part of a new A$100 million (approx. US$68.3M) military assistance package aimed at helping Ukraine defend against the Russian invasion.

As announced by prime minister Anthony Albanese during a visit to Ukraine this weekend, the new package will deliver important capabilities to the Ukrainian armed forces.

According to the Australian defense ministry, the increase in support takes Australia’s total military assistance to Ukraine to over A$385 million as Russia continues its invasion of Ukraine.

Beyond providing a significant number of military vehicles, Australia will also give de-mining equipment, a donation to NATO’s Ukraine Comprehensive Assistance Package Trust Fund, and a further A$7 million for the purchase of defense technology and equipment from Australian suppliers.

With this latest package, Australia will have gifted a total number of 60 Bushmasters, in addition to the 28 M113AS4 armored vehicles, to Ukraine.

Additionally, Australia has been sending 155mm lightweight howitzers and associated ammunition to Ukraine since April this year.

The de-mining equipment will help Ukraine remove some of the dangerous remnants of war littering the countryside.

“This latest commitment will provide the government of Ukraine with valuable tools to aid their continuing resistance against this unwarranted aggression,” deputy prime minister Richard Marles said.

The Bushmaster was built in Australia to provide protected mobility transport, safely moving soldiers to a battle area prior to dismounting for close combat. The The 11-ton, 4×4 blast and ballistic protected mobility vehicle with a 4-ton payload is well suited to provide protection to the Ukrainian Armed Forces soldiers and Ukrainian civilians against mines and improvised explosive devices, shrapnel from artillery and small arms fire. 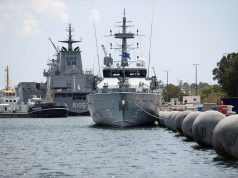