A multinational force of international partners taking part in exercise Rim of the Pacific have carried out another multi-domain sinking exercise (SINKEX) as part of the maneuver.

Air, land, and sea units from Japan and the US sank the decommissioned Austin-class amphibious transport dock ship ex-USS Denver (LPD 9) near the Hawaiian Islands operating area on July 22.

Denver is the second retired US Navy ship to be sank during the maneuver. The first one was the Oliver Hazard Perry-class guided missile frigate ex-USS Rodney M. Davis (FFG 60) which was sunk on July 12.

Denver sank in waters more than 15,000 feet deep and over 50 nautical miles North of Kauai.

From the land, the Japanese Ground Self-Defense Force and US Army shot Type 12 surface-to-ship missiles and practice rockets.

Japanese Ground Self-Defense Force (JGSDF) Maj. Gen. Shigeo Kaida, director of the Operations Support & Training Department at the Ground Staff Office in the Japanese Ministry of Defense, talked about the importance of the training opportunity the SINKEX provided.

“This sink-at-the-sea exercise demonstrates current operational capabilities and tactical skills, and provides a valuable opportunity to coordinate and collaborate between Japanese Type 12 Surface-to-Ship Missiles (SSM) and the US Army High Mobility Artillery Rocket System (HIMARS) to conduct a live fire and comprehensive exercise,” said Kaida. “Alliances with partner nations are a key element to secure our regional stability and enhance our capabilities of deterrence and response in the Indo-Pacific region.”

Royal Canadian Air Force Brigadier-General Mark Goulden, commander of the RIMPAC Combined Force Air Component Command, is responsible for operations in the air domain across the exercise and discussed the challenges of a SINKEX and amount of teamwork involved to successfully complete the mission.

“SINKEX is more than the end result. It takes a team of capable, adaptive partners from different nations and disciplines to come together to find, fix, track, target, engage and assess with the agility and precision required to put the right ordnance in the right place, at the right time, every time,“ said Goulden. “The SINKEXs at RIMPAC provide us with a uniquely complex and challenging environment for partner forces to hone those important skills. Being able to work together was our goal, and SINKEX is a demonstration of our success.”

Former Navy vessels used in SINKEXs are prepared in strict compliance with regulations prescribed and enforced by the Environmental Protection Agency under a general permit the Navy holds pursuant to the Marine Protection, Research and Sanctuaries Act. Each SINKEX is required to sink the hulk in at least 1,000 fathoms (6,000 feet) of water and at least 50 nautical miles from land. Surveys are conducted to ensure that humans and marine mammals are not in an area where they could be harmed during the event.

Ex-Denver, the third US Navy ship to bear the name of American pioneer James William Denver and the capital of the state of Colorado, was commissioned Oct. 26, 1968. Over its history, the ship played a significant role in several operations, most notably Operation Frequent Wind, the evacuation of Saigon, Vietnam in April 1975. The ship was decommissioned as the oldest deployable warship in the Navy after 46 years of service at Joint Base Pearl Harbor-Hickam Aug. 14, 2014.

Twenty-six nations, 38 ships, three submarines, more than 170 aircraft, more than 30 unmanned systems and 25,000 personnel are participating in RIMPAC from June 29 to Aug. 4 in and around the Hawaiian Islands and Southern California. RIMPAC 2022 is the 28th exercise in the series that began in 1971. 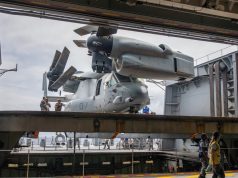 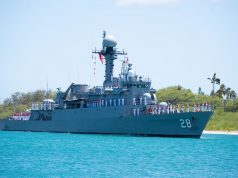