Minister for Defence, Senator the Linda Reynolds said this deployment was a targeted and meaningful element of Australia’s broader contribution to the International Maritime Security Construct (IMSC), a US-led mission tasked with safeguarding freedom of navigation in the Arabian Gulf, Gulf of Oman, the Red Sea, and the Straits of Hormuz and Bab al Mandeb.

“Over the last month, the P-8A Poseidon aircraft has provided valuable maritime surveillance and reconnaissance to support the coalition partners in the IMSC,” Minister Reynolds said.

“It is now time for the Poseidon to return home, having played a key role in supporting freedom of navigation and the free flow of shipping, which is crucial to regional security and stability.”

On return to Australia, the P-8A Poseidon and its crew will contribute to maritime intelligence, surveillance and reconnaissance duties at home.

A small number of Australian Defence Force personnel will continue to provide liaison, planning and coordination support to the IMSC headquarters.

A Royal Australian Navy Anzac-class frigate will deploy to the Middle East in January 2020 for approximately six months, in support of Australia’s contribution to the IMSC and the Combined Maritime Forces (CMF). 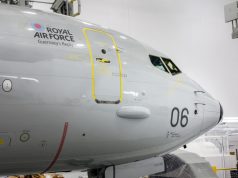