Former Gowind-class corvette L’Adroit has become the Argentine Navy’s first French-built and delivered offshore patrol vessel A.R.A Bouchard after it was handed over two months ahead of schedule.

Bouchard is the first of four OPVs ordered by Argentina from Naval Group. The shipbuilder built former L’Adroit with its own funds and leased it to the French Navy from 2011 to 2018. After France and Argentina signed the four-vessel deal, Adroit started a ten-month period of upgrade and modernization works before being delivered to the new owner.

The three others OPVs will be transferred to South America from April 2021 at the pace of one unit every six months.

Since mid-February, Naval Group’s teams have carried out a major technical shutdown in order to maximize the potential of the ship for the Argentinian Navy and to adapt it to their needs.

Major operations have been carried out notably to modify the combat system in order to make it compliant to the customer’s needs, to enhance the ship’s capacities by modifying the propulsion system, to increase its autonomy by reinforcing its freshwater production capacity and to equip the ship with a 30 mm gun. 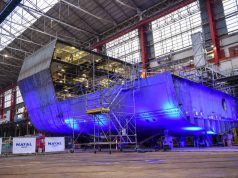 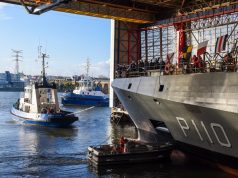 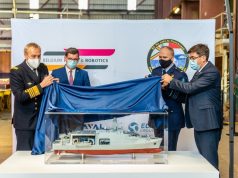 Belgium, Netherlands cut steel for first of 12 mine countermeasure ships