As the US Navy and Marine Corps are looking to shift from high-profile manned platforms to unmanned surface vessels (USV), the Pentagon’s research agency is looking for ideas on how to employ a fleet of smaller, disposable vessels.

These smaller, versatile, and more agile vessels have the tactical capabilities and flexibility to support a wide range of missions where focused operations and increased vessel numbers assure flexible responses against asymmetric threats.

Whether conducting independent operations or complementing a manned surface ship, the distributed group of USVs may provide a more dynamic, rapid response capability while increasing the geospatial coverage of maritime operations.

A key limitation of USVs is their restricted operational ranges due to increased wave making resistance inherent with smaller platforms. At-sea refueling, use of heavy-lift ships, strategic airlift, and increasing overall vessel size are all solutions to this limitation but are fraught with operational vulnerabilities against peer adversaries.

DARPA is looking to address this through the Sea Trains Program that will be aimed at reducing wave making resistance of medium USVs (MUSV).

DARPA elaborated that it is eyeing three potential approaches within the sea trains concept; a connected sea train, a connectorless sea train, and formation sea train.

The first one includes a physical connection between four or more consecutive vessels during transit operations. This approach creates the equivalent of a long parallel mid-body for the vessel to decrease the wave making resistance, while enabling the vessels to disaggregate to conduct tactical missions.

The “connectorless sea train” employs compressive forces to keep four or more consecutive vessels together with the goal of reducing connector loads and moments.

The formation sea train envisions four or more vessels transit in close lateral and longitudinal formation to exploit wave interference between the vessels.

These concepts are envisioned to utilize surface wave cancellation to minimize the collective wave making resistance of the sea train system without requiring physical connections.

The deadline for the proposals is February 20, 2020. The agency expects to carry out first tests of the concept in the second half of fiscal year 2022. 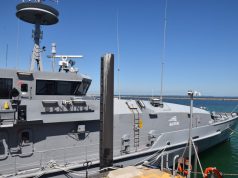