The US Navy kicked off construction of a new facility that will become the fleet’s only dedicated place to test, fire and evaluate complete laser weapon systems in a maritime environment.

“Thank you to our partners who were able to join us today for this momentous occasion,” said Capt. Ray Acevedo, NSWC PHD’s commanding officer, at the small groundbreaking ceremony. “This lab is a great win for the navy, and it further affirms that even during a crisis, the Navy and NAVSEA have been, and continue to be—open for business, executing our mission!”

Once in operation, the facility will recreate, as realistically as possible how high energy laser (HEL) weapons behave on a navy ship platform— customers/users will test how HEL beams perform in sea conditions such as moisture, humidity, salt, fog, differing air densities and temperature changes will affect laser performance; how ships’ systems will power and cool the energy-intense weapons; and will test them by shooting at targets on the sea range and in the air over the sea range.

“(At DESIL,) the ISEA engineers will recreate issues, and investigate (engineering) issues for deployed DE-installed ships, and use the lab as a test range asset,” said Marcos Gonzalez, project lead for DESIL. “It could (also) bring in industry-developed versions of lasers, and developers could perform firing exercises on the test range. We (also) want to make it open to others in the DE world, such as university researchers, because of its unique location, adjacent to the sea range.”

The lab has been designed to handle increasingly more powerful lasers, the navy noted, adding that its construction would cost an estimated $23 million. 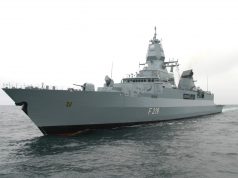 US Navy trials use of drones for laser weapon testing