America conducted integrated air defense operations on Oct. 20 with F-35A Lightning II aircraft from the Japan Air Defense Command. The training operations were designed to increase the tactical proficiency, lethality and interoperability of the amphibious forces of the America Expeditionary Strike Group and the Japan Air Self-Defense Force (JASDF) in the maritime domain.

“The US-Japan alliance has been the cornerstone of stability and security in the Indo-Pacific for more than sixty years,” said Capt. Luke Frost, America’s commanding officer. “We have no more capable partner in the world than the Japan Self Defense Force. Every opportunity we have to continue to train and exercise together improves our interoperability and strengthens our joint integrated capabilities.”

Our alliance will continue to play that role in the future. Operations included advanced tactics, techniques and procedures to exercise command and control in employing the F-35A Lightning II in air defense and sea control.

“The training proved to be a very significant opportunity for us,” said Col. Shinichi Nomura, flight group commander, 3rd Wing, Japan Air Self-Defense Force. “Training with assets of other services is essential to improve interoperability and joint operations capability.” 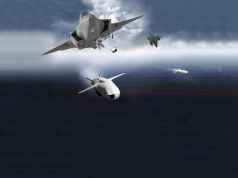