A steel-cutting ceremony at BAE Systems’ Osborne shipyard in South Australia marked the start of the next stage of Australia’s next-generation frigate program.

At this stage, BAE Systems Maritime Australia will build five prototype blocks to test the production systems, develop the facilities and ensure the workforce is trained to build the Hunter-class frigates.

Australian defense minister Linda Reynolds said this was the culmination of two-and-half years of hard work since the completion of the competitive evaluation process in June 2018.

“As this government has always said, the Hunter class program is on schedule to meet its milestone of beginning prototyping in 2020 and beginning construction of the first of class by end 2022,” minister Reynolds said.

“The Hunter-class program will be the cornerstone of this government’s up to $183 billion Naval Shipbuilding Plan which will see more than 70 naval vessels built here in Australia by Australian workers.

The prototyping phase of the program will run for three years until 2023. The construction phase is scheduled to start by the end of 2022.

Australia’s Hunter-class frigates will be based on BAE Systems’ Type 26 Global Combat Ship design, which has also been selected by the UK Royal Navy and the Royal Canadian Navy.

The frigates will displace 8,800 tons and measure 149.9 meters in length. They will be equipped with the Aegis combat system, supported by Saab interfaces and the CEA Technologies CEAFAR2 phased array radar. Armament will include a 32-cell Mark 41 Vertical Launch System, cannister-launched anti-ship missiles, in addition torpedo and decoy launchers and close-in weapon systems. 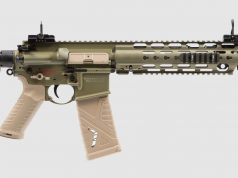 Germany proceeding with HK416A8 as its new assault rifle