The Australian government announced on January 25 it would invest A$1 billion to begin the early development of advanced guided weapons to enhance Australia’s maritime security.

While the defense ministry stated the commitment would modernize the navy’s platforms to project and maintain sea control, details remained scarce.

“With ranges in excess of 370 kilometers for anti-ship and surface-to-air missiles, and 1,500 kilometers for maritime land strike missiles, these new weapons will enhance the protection of our maritime resources and borders, and hold adversaries at risk at much greater distances,” the defense ministry statement read.

Australian defense minister Linda Reynolds said new investments would be made across the current and future submarine and surface combatant fleets.

“These new capabilities will provide a strong, credible deterrent that will ensure stability and security in the region,” minister Reynolds said.

“The planned acquisitions – when aligned with the ongoing state-of-the-art combat system development and national shipbuilding programs – represent an investment of up to $24 billion, which will build a lethal and highly responsive Navy for decades to come. 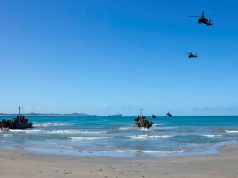