Italian Navy aircraft carrier ITS Cavour returned to US naval base Norfolk on Friday with a certification to operate F-35B short takeoff and vertical landing (STOVL) fighter jets.

The Italian Navy joined an exclusive club of countries capable of operating fifth-generation fighters from its ships after four weeks of trials, which started in late February. The only other two navies with this capability are the US and the UK Royal Navy.

ITS Cavour achieved the milestone after getting underway from Italy late January and arriving in the US in February. Cavour departed Norfolk on February 28 to start the trials.

Two specially instrumented US F-35Bs from Naval Air Station Patuxent River landed on the Italian Navy flagship for the first time on March 1. Over a course of four weeks, the F-35Bs carried out over 50 flight missions, in different weather and sea conditions. Some 120 vertical landings and as many short take-offs with the help of the ski jump were also part of the certification procedure, as well as vertical take-off tests.

While ITS Cavour is now certified to operate the F-35B, there is still work to be done until the 244-meter ship reaches initial operational capability with the F-35B. The navy expects this to happen in 2024. F-35Bs are replacing the AV-8B Harrier II STOVL aircraft which have been in service with the Italian Navy since the 1990s.

Italy is procuring a total of 30 F-35Bs for its air force and navy, in addition to 60 F-35A conventional takeoff and landing (CTOL) versions being procured exclusively for the air force.

In addition to Italy, the UK, and the US, Japan and South Korea are expected to obtain a capability to operate fifth-generation fighters from its ships. Japan is already converting its Izumo-class helicopter carriers for STOVL operations, while South Korea is planning the purchase of a purpose-built aircraft carrier. Reports have also pointed to the possibility of the UK exporting its HMS Queen Elizabeth aircraft carrier design to the country. 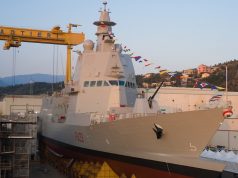