An unmanned joint light tactical vehicle (JLTV) has launched a Naval Strike Missile (NSM) off the California coast, in a demonstration carried out by the US Marine Corps.

The test with the Oshkosh-built JLTV and Raytheon’s NSM was a demonstration of the Navy Marine Expeditionary Ship Interdiction System (NMESIS) Ground-Based Anti-Ship Missile (GBASM) capability.

NMESIS is envisioned to provide anti-ship fires from land as part of an integrated naval anti-surface warfare campaign. The Marine Corps’ GBASM solution consists of an unmanned JLTV-based mobile launch platform, called the Remotely Operated Ground Unit for Expeditionary Fires (ROGUE-Fires), and the NSM. The NSM is the same missile used by the navy for the over the horizon weapon system deployed on littoral combat ships.

Once fielded, NMESIS would provide the Marine Corps with a missile capable of sea-skimming, high-g maneuverability, and the ability to engage targets from the side, rather than top-down.

The inaugural test proved the system’s ability to fire an NSM and score a direct hit against a surface target at sea, Raytheon said in a release. It should be noted that the first live fire test of NMESIS took place in November 2019.

It is unclear from the Raytheon release when the first live-fire demonstration with a guided NSM took place. It is likely that the image from the Raytheon release is from a November 2020 test, which was initially scheduled to take place in June 2020. The delay in the schedule was caused by a software misconfiguration on the missile, according to a Director Operational Test and Evaluation (DOT&E) report.

“Our Naval Strike Missile is a vital weapon for denying enemies the use of key maritime terrain,” said Kim Ernzen, vice president of Naval Power at Raytheon Missiles & Defense. “This test further demonstrates our partnership for advancing the Marine Corps’ modernization priorities of enabling sea control and denial operations.” 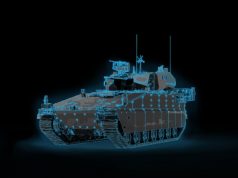 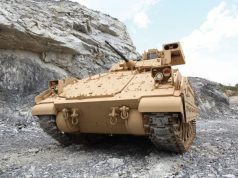