The frigate’s support to sanctions enforcement marks the second Australian defense force contribution to operation Argos this year. Argos is the name for Australian efforts in addressing illicit trade and sanction evasion in the region.

“Australia is committed to the stability and security of our region and will continue to support sanctions on North Korea until it takes concrete steps towards denuclearisation,” Lieutenant General Bilton said.

“HMAS Ballarat will contribute to a multinational force including Canada, France, Japan, New Zealand, the United Kingdom and the United States, to monitor and deter illegal ship-to-ship transfers of sanctioned goods.”

This is the fifth deployment of a navy vessel to operation Argos since the operation started in 2018.

The Australian Defence Force has also deployed a maritime patrol aircraft on eight occasions for the operation.

Ballarat is joining a fleet of international ships and aircraft contributing to the mission. Last month, the Royal New Zealand Air Force deployed a P-3K2 Orion maritime patrol aircraft in support of the same mission. 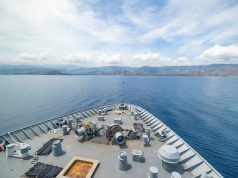