The US Coast Guard’s largest unit outside the US has welcomed its first two Sentinel-class fast response cutters (FRC), as USCGC Charles Moulthrope (WPC 1141) and Robert Goldman (WPC 1142) arrived at their new homeport at Naval Support Activity Bahrain on May 25.

The FRCs are two of six planned to be attached to Patrol Forces Southwest Asia (PATFORSWA), forward deployed to Bahrain with Commander, Task Force (CTF) 55.

Charles Moulthrope and Robert Goldman started their journey from San Juan, Puerto Rico, to the Middle East in April this year.

“These crews have shown that they are more than ready for the mission at hand in this region through numerous successful engagements with partner maritime forces during port visits and bi-lateral exercises,” said Capt. Willie Carmichael, commander of PATFORSWA. “I am extremely proud of the high performance they have displayed during their transit to Bahrain.”

Aquidneck and Adak are set to decommission in Bahrain later this year, and are being replaced as part of the Integrated Deepwater System Program (IDSP), the Coast Guard’s 25-year program to replace most of the branch’s equipment.

The IDSP plans to have 64 fast response cutters with Charles Moulthrope and Robert Goodman being the 41st and 42nd, commissioned into service on Jan. 21 and Mar. 12, respectively.

The FRCs are designed to patrol coastal regions and perform expeditionary operations.

They feature advanced command, control and communications systems and improved surveillance and reconnaissance equipment. They are also capable of launching and recovering small boats from the stern.

“The addition of the FRCs to our task force has been highly anticipated and the team here is excited to work with these outstanding crews,” said Capt. Christopher Gilbertson, commander of Destroyer Squadron (DESRON) 50 and CTF 55. “The advanced capabilities of these cutters greatly enhances our ability to provide high-end support to regional and coalition partners throughout the area of operations.” 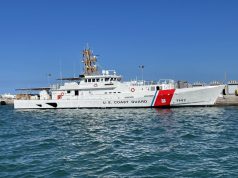 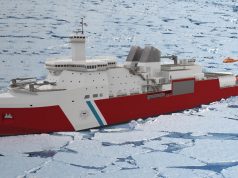