The purchase was confirmed by the Croatian government on Friday after first unconfirmed reports about the choice of the MiG-21 successor emerged earlier this month.

According to details shared by the defense ministry, Croatia is buying 12 Rafales, 10 single-seaters and 2 two-seaters. The aircraft will be transferred from the French Air Force.

“By purchasing fighter jets, Croatia is gaining a powerful strategic deterrent for the next 30 to 40 years, which significantly strengthens its international position, protection of airspace and multiplies the overall combat capability of the Croatian armed forces,” Croatian prime minister Andrej Plenković said.

He also added that the purchase would allow the country to reach the NATO guideline on spending a minimum of 2% of its GDP on defense.

Built by Dassault Aviation, the F3-R Rafale Standard features an AESA RBE2 radar and the capability to carry long-range Meteor missiles for beyond visual range engagements in all weather conditions.

The F3-R also offers an enhanced ground attack capacity, compared to previous version, with the ability to control the munition flight time, the laser illumination and the in-flight weapon settings, including for the terminal laser guidance AASM. The aircraft also features an automatic ground collision avoidance system.

Dassault Aviation said it was delighted that Croatia will become the fifth Rafale export customer.

“This latest success in a competition between European and U.S. aircraft confirms the technological and operational superiority of the Rafale, latest-generation, combat proven, multirole fighter. It also reinforces the Rafale’s position in the European Air Forces, making an active contribution to European defense sovereignty,” the company said in a statement.

The Rafale aircraft will replace the MiG-21 aircraft, which are scheduled to be retired by 2024.

Croatia chose the French offer over Saab’s Gripen fighter, and used F-16 fighters from the US and Israel. 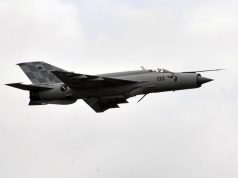