The Bangladesh Air Force will be using trainer aircraft from German manufacturer Grob Aircraft SE, according to local reports.

The decision to go with the 120TP two-seat turboprop for pilot training was confirmed by outgoing Chief of Staff Air Marshal Mashiuzzaman Serniabat.

As reported, Bangladesh is buying a total of 24 airframes under a transfer of technology agreement, as well as two maintenance facilities.

The success of the German company in South Asia follows an earlier one from last month, when Sweden announced it would purchase the same type of trainer to replace its ageing SK 60 twinjets.

Sweden is buying seven aircraft, simulators, flight safety equipment, and maintenance of the aircraft and simulators, with options for further purchases. The reports from Bangladesh did not say whether the Bangladesh Air force would be acquiring simulators. 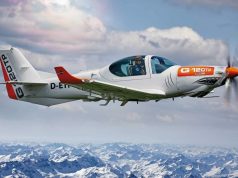