The acting secretary of the US Navy, Thomas W. Harker, has announced that the fifteenth Spearhead-class Expeditionary Fast Transport (EFP) ship will be named in honor of the San Diego seaside community of Point Loma.

The future USNS Point Loma (T-EPF-15) will be the second naval vessel to bear this name, the first being a deep submergence support ship that was decommissioned in 1993. Currently, eight navy vessels honor the state of, or a location in, California.

Austal USA has already received a $235 million contract for the detail design and construction of Point Loma. According to a Pentagon contract announcement, the ship should be ready for delivery by March 2024.

Similarly to the fourteenth ship, EPF 15 will be receiving modifications for enhanced medical capability. Other improvements will include habitability modifications, the capability to land a V-22 Osprey on its deck and improved small boat handling.

“It is my honor to recognize the enduring support of the community and residents of Point Loma, who for generations have provided the Navy and Marine Corps with critical support and infrastructure integral to the navy’s mission,” said Harker. “The crew of the future USNS Point Loma will honor this time-honored relationship, and will continue to serve this community and the nation for generations to come.”

The name selection follows the naval tradition of honoring small American cities or communities with ties to the navy. The community of Point Loma has a long-standing naval presence, beginning in 1901 with the establishment of the Naval Coaling Station, La Playa, which later became Naval Supply Center San Diego, Point Loma Annex in 1943. The Naval Training Center San Diego in Point Loma served as a basic training facility for over seven decades, and the Fort Rosecrans National Cemetery is the site of a monument for Sailors killed in a boiler explosion on board USS Bennington (Gunboat No. 4) in 1905.

Currently, Naval Base Point Loma comprises six installations and provides support to 70 US Pacific Fleet afloat and shore based tenant commands headquartered on the base.

The future T-EPF-15 is the last of the 15 EPFs awarded to the navy, with the first delivered in 2012. The Navy has accepted delivery of 10 EPFs with USNS Burlington (T-EPF 10) being the most recent delivery in November 2018.

EPFs are commercial-based catamarans designed to be highly capable and affordable, allowing flexibility to the fleet with their ability to access harsh ports with minimal external assistance. EPFs maintain a variety of roles including humanitarian assistance, maritime security and disaster relief, among others. 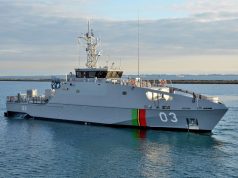